My two big kids are getting into watching Masterchef with me this year, and they have developed a desperate attachment to Rishi. They love him! Ivy even begs me to let her practice separating eggs just like him. (She's gotten pretty good at it too.) Their watching nights are Sunday and Wednesday, and the off nights, if the show is on, they are prone to scurrying out from their room to sneak forbidden glances at the TV and ask me 'Is Jules eliminated? How did the chicken turn out?' Ivy even called lamb a 'protein'. yesterday. I can't tell you how happy this makes me.

I have been training these kids into their roles as my little soux-chefs for years. Years I tell you! 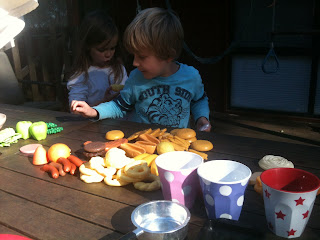 We played Masterchef last week. The kids set all the toy food up as the pantry, and I gave them two minutes in there and a challenge along these lines Best Dinner Ever! Super Yummy!  They raced around making bizarre combinations of food, and then when I said '10 seconds to go! If you'e not plating up, you should be!' they both wildly threw food onto plates and presented it to me. We had one immunity challenge and one elimination challenge, and then we staged the grand final. I judged the winner as Ted, mostly because Ivy was less likely have a massive losers meltdown.

Ivy made immunity pins and Masterchef signs for the judges seats. It was the best game we've played for some time. I read this blog post recently from an American ex-contestant. Ermegerd! The horrors! Can life off-screen for the Australian players be like this? 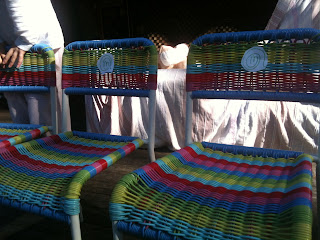 Posted by Rachael @Mogantosh at 1:16 PM